Next to Hans de Roos and Magdalena Grabias, the following participants in the Dublin 2016 conference, listed in in first-name order, volunteered to support the organisation of the new conference series:

Clemens Ruthner, Assistant Professor for German at Trinity College, Dublin, and initiator/moderator of the Doctor van Helsing Society. Author of two books on the fantastic in literature (Unheimliche Wiederkehr, 1993; Am Rande, 2004) and of various academic essays.

John Gordon Melton, Distinguished Professor of American Religious History of  Baylor University’s Institute for Studies in Religion; Member of the International Board of the Center for Studies in New Religions (CESNUR), Turin, Italy; Senior Member of the Transylvanian Society of Dracula (US Chapter). Author of over 35 books (e.g. The Vampire Book: The Encyclopedia of the Undead, Visible Ink Press; 3rd  edition 2010) and numerous scholarly articles and papers.

Julia Kruk, Chairwoman and Treasurer of the Dracula Society, London.

Marius-Mircea Crișan, Assistant-Professor for English at the West University, Timișoara, Romania; organized the BBEC Conference in Timișoara 2015 and 2016. Author of The Birth of the Dracula Myth: Bram Stoker's Transylvania (Pro Universitaria, 2013) and many other book contributions and articles.

Tanja Jurković, Lecturer of English and French Language and Literature at the University of Zadar, Croatia; Currently preparing for a Ph.D. in Film and Media at Stirling University, Scotland. Organizer of the Sherlock Holmes week in Zadar; photographer. 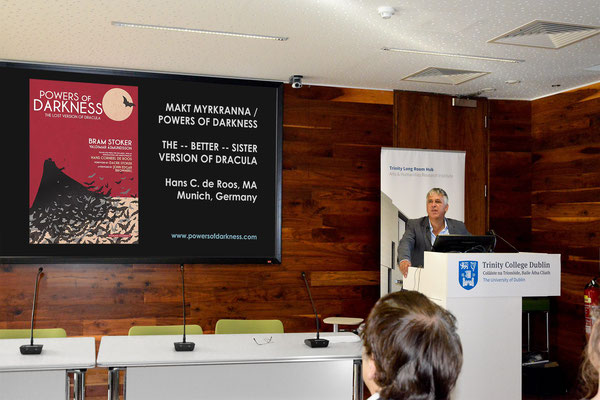 The Children of the Night Conference series is a non-profit academic initiative, supported by worldwide renowned Dracula experts.

Our aim is to present groundbreaking research on Bram Stoker, his novel Dracula and related topics on a bi-annual basis.

Participation is open to everyone who has a truly interesting presentation to make. Moreover, the conferences will feature artistic contests and will be accompanied by a cultural program.

Because of the ongoing COVID crisis, however, our event in April 2021 will be virtual. Pre-recorded presentations or videos are welcome, if they premiere on our conference. The event will be hosted by Transilvania University of Brașov, Romania, Maria Curie-Skłodowska University Lublin, Poland, and the virtual platform created by hansderoos.com.

CHILDREN OF THE NIGHT

During our April 2021 conference, Palgrave Macmillan, renowned publisher of academic books, will present an interview with the makers of its recently released Gothic Handbooks. Clive Bloom, who spoke at the 2016 Dublin conference and is a member of the Scientific Committee for the 2021 event, is the editor of this series.

Click this link and you can preview a free chapter of Dracula-An International Perspective, edited by Marius Crișan (Palgrave, 2017), and with many interesting contributions (including chapters by our keynote speakers).

This volume analyses the role of Bram Stoker’s Dracula and its sequels in the evolution of the Gothic. As well as the transformation of the Gothic location—from castles, cemeteries and churches to the modern urban gothic—this volume explores the evolution of the undead considering a range of media from the 19th century protagonist to sympathetic contemporary vampires of teen Gothic. Based on an interdisciplinary approach (literature, tourism, and film), the book argues that the development of the Dracula myth is the result of complex international influences and cultural interactions. Offering a multifarious perspective, this volume is a reference work that will be useful to both academic and general readers.

Books With Bite offers a special discount on Take A Bite for attendees of the upcoming congress. Order between 12th and 23rd April and get the book for £7 including postage. Please put "Take A Bite, Drac" in the notes to claim the discount. To order an e-book, mail to  nancy@bookswithbite.in